Many of Peru’s ancient structures have lasted well, but not the pyramids. Most of them have eroded so much they are unrecognisable. Below is a restored adobe pyramid from around 800BC, located in the middle of the high-rise district of San Isidro.

Is it so surprising that, with so many pyramids, the Americas also had mummies? This one was found within a pyramid at Huaca Huallamarca. 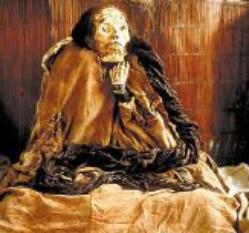