Robert Temple wrote a book called The Sirius Mystery – which deals with Earth’s connection to the Sirius star system.

To Egypt, the 23rd of July, when Sirius starts to rise the waters of the Nile begin to flood. Then it meant fertility, that is one reason, for she was Isis. Sirius, Isis, the great mother of the gods. Even the Swiss celebration day, is the 1st of August. This is a Sirius relative.

Our solar system is born in from the womb of Isis. Sirius B, which is Isis , is made of iron (radio astronomy has shown). The iron of Sirius b, is the same as the iron in our blood and the iron of Earth and of our solar system. Sirius is our blood. We resonate to her. She is older than our solar system, which is a combination of interstellar debris, including the gas clouds, our sperm of Osiris/Orion. The iron in our blood comes from Sirius, its position in the sky, could thus be considered to resonate to Sirius’s position of influence. Iron is the only true magnetic element. 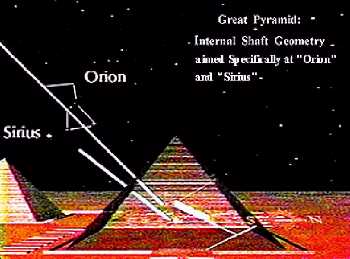 Sirius has a unique relationship to us. The difference between the mass of our sun and the mass of Sirius is a harmonic and universal miracle. Sirius B has a ratio mass difference to our sun of 1.053. This becomes significant when we look at the Giza plateau. When comparing the mean base side of the Cheops Great Pyramid to the Mean base side of the Khephren pyramid, the larger Cheops measurement is 1.067 that of the Khephren’s.

When this is then compared to the equation of Sirius B and our sun, the Great Pyramid being Sirius, and the Khephren pyramid our sun, as the Egyptian Book Of The Dead indicates (in fact the hieroglyph for Sirius is the Hieroglyph of the pyramid) they share a difference 0,01, which is very precise, scientifically. However, there is an extra digit 0.014, that doesn’t sound so perfect anymore).

It is the difference between the mathematics of the octave and the 5th. 0.0136 is that precise discrepancy between the mathematics of the fifth and the octave, and it is rounded off as 0.014, and as Sir Arthur Eddington relates: there is 136° of freedom of the electron. theory is 0,.036. And furthermore 136 + 1 equals the Fine structure Constant of physics, the universal natural constant. Fractal harmonics, in the resonance of the Sun Sirius Pyramids equation, or interstellar neuron holography.
This is also evidenced, historically as having been implicated in the ancient “Mystery Schools” within the Archaic Esoteric Arkana of the Arcane Wisdom, as a precise wisdom, or the Isis Mysteries, and her mathematics. The astronomer and mathematician Macrobius, at the end of the fourth century mentioned the sacred fraction 256/243 which is 0.053 (Sirius b mass to Sun), and describes its use in harmonic theory by peoples which already to him were “ancients”.

This harmony of the Sphere is accurate within 3 decimals of each other, and it is also the difference between perfect mathematics (the ones that work theoretically) and the actual mathematics of the universe, 0,014. What that means is that Sirius is no coincidence. It is really resonating to our sun. It is connected to our sun like a neuron, because they have this major mathematical relation in size to each other, harmonic resonance, that is likened to holography, a kind of Virtual Neuron Internal Net, as we may call it, or as Astronomer Royal, Robert Temple, has dubbed it: “The Anubis Cell”.

Since such a long distance resonance is now demonstrated to occur between Sirius B and our sun 8.7 light years from each other, these are two solar systems whom are inhabiting the same cell of space, which enacts the “Complexity theorem” which has “instantaneous communication” occurs in such cells as a form of ordered self regulation. Instant communication harbored in this macro region of space, which acts as if the elements are not separated by any temporal distance. It is a macro region cell that turns disorder into order, called a “dissipative structure”. Such an onset of “complexity”, according to Nobel prize winner Professor Ilya Prigogine, can result in the instantaneous extension of long-range order by a magnitude of more than 10 million. That is like a fifth of the people of France speak the same sentence at the same time.

So Sirius is Sirius business in terms of resonance. No wonder the Egyptians placed so much significance on it. It is the iron in the blood, it is the Earth’s iron, it is in the same holographic virtual neuron of order. What happens there, instantly is mirrored in equivalence, here, by harmonic resonance, that utilizes “complexity theory”, yielding “instantaneous communication”, without subscribing to a speed of light limit. Do you imagine that the alignment of our solar system at 90° to the galactic plane is not noticed in the resonance of Time and Space of Sirius. This is a cross to a cross.

Furthermore, Sirius C, has now been detected, as relate by astronomers Daniel Benese and J.L. Duvent in Astronomy and Astrophysics magazine in 1995. When Sirius C is mapped by the pyramid capstone, and its mass is 0.005 of our sun, the capstone was 0.00643 of the Great pyramid. Hence 0.001° of accuracy.

August the 11th, 12th and 13th are the Isis days, that are very important to us. Isis sings in our blood at a high point then. That is why it has been so much used by Napoleon, the magicians and the “time travelers”.

August the 13th is also the day when Quetzalcoatl was born, ruling the serpent of illumination, the fusion of bird with serpent, Horus with Set’s Sata snake, Gurudas with Nagas. It is also the higher Venus cycles, the top of the pentagrams cycle of the order of Venus in our skies during one year. So August the 13th has a Venus-Sirius connection. The cycle of Sirius B is exactly 49 years cycle, alternating to 50 years. That is the Jubilee, so there is a Sirius/Isis Jubilee now.

The alignment of the Holy Cross happens every 12,901 years. The whole zodiac, from Aquarius to Aquarius, Ptah to Ptah (the Water Bearer and Phoenix) – it just happens two times. Only at one time it happens in-between Zodiacal Alpha and Omega.

The Egyptians, like the Greeks and Vedic astrologers, had Aquarius apart from being Ptah (the water bearer), as the “>Phoenix. And the Phoenix has the same hieroglyph as the Pyramid, and Sirius. In that sense we could say that this cross is doubled up as a double cross, in that we are entering the age of the Phoenix, which is Sirius, by a 90° cross.

The same Hieroglyph is also used for the Pyramidion, the capstone, and the vehicle of ascensions. The first sperm of Atum Ra, of the NTR gods. This sperm of the gods, was also eaten as the Spirit and the Bread Of Light. Made from super conducting elements, found in meteorites, which are rich in Iridium and Rhodium, and which were processed at Mount Serabit, Sinai, where the White Powder, the Sperm of the Gods, was discovered. The Stone from the stars, Bija, was also a meteorite to the ancient Egyptians: Sperm = Bijah; Meteorite; Bread; Pyramidion. Which in turn equals: Sirius, Pyramid, Phoenix from the Iridium Ashes, and Water Bearer of the Aqua Vitae, the Arcanum of Immortality.

This alignment is important and does not happen very often. We have this massive, enormous rotation. When one spins a bicycle wheel and holds it, the faster it spins the heavier it gets and the more it pulls you.

When you have a solar system, it is like an enormous gyroscope of inertia. That is an enormous rotation that affects everything, and you have a galaxy. Imagine a gyroscope galactic wide, making a cross to one that is solar system wide. A 90 degree angle is an ortho plane, that is a way that information exchange and translation, and compression of one holographic continuum into another, galaxy into solar system, into Earth, and solar system into galaxy.

But what this also means is that the two planes in their middle, have a still point. From June/July to May 2000 there is this stillpoint of focus, gravitational vortex compression, with potential magnetic coherent implosion. That is why our colleague Daniel Winter dubbed it a burp: the compression of planes, and then the expression of the digested gravitational bubble into a new creation, in anticipation of the 2012 galactic full conjunction and maximum concrescence of novelty.

The “Anubis Cell” (which Emmanuel called Oversoul Sun), as Dr Robert Temple has suggested, is stating that there is such a major resonance relative of Sirius and our sun, that perhaps what ever happens on Sirius effects us in a mathematical sense. So that we are maybe even a part of a holographic show designed at Sirius. Horus is shown pictographically as a crocodile with a falcon head and a dog on its tale, illustrating the knowledge of coherent holography between the two systems.

Sirius rises just before the Sun once a year. In fact, it was the herald of the new year for the early Egyptians and also marked the time of the annual flooding of the Nile.

Sirius has an “invisible twin” which is a highly compacted “white dwarf” with an unimaginable density. An African myth (The Dogon) holds that there is a third partner, however, no third body has yet to be discovered. I suspect that the “third component” is what we call a “black hole” because the Orion Constellation is a virtual nursery when it comes to producing stars.

The Great Pyramid (like Sirius) too has an “invisible twin”! The height of the Great Pyramid is exactly one half pi (22/7) in relationship to the sum of the sides of its base! The 1/2 pi gives “the big clue” regarding the pyramid’s “other half”. 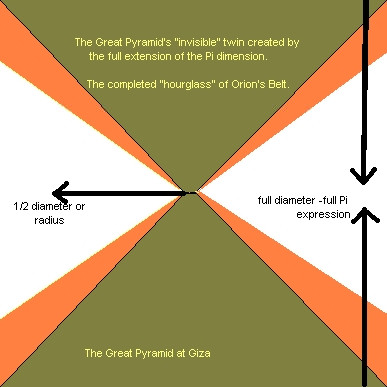 The Great Pyramid is the bottom pyramid representing “dense earth” (the lower portion of Orion) and its “etheric twin” is the inverted pyramid on top. Together they represent Pi. This juxtaposition is also a “representation” of Orion with Orion’s Belt at the exact spot where the two pyramids meet. The place where the physical meets the spiritual is at the “capstone” of The Great Pyramid or at Orion’s Belt which divides his upper nature and lower nature.