There are three stepped pyramids within this ancient Mayan ceremonial centre, located in the Mexican state of Chiapas. The more famous of these is the Pyramid of Inscriptions. Its height of 20 metres consists of eight stepped storeys, not counting the temple on top. Inside the temple, two large vaulted chambers house three glyphic panels which collectively make the second longest known ancient Mayan inscription . Deciphered in the 1970s, the inscriptions revealed that the funerary crypt within the pyramid belonged to Lord Pacal, whose reign ended with his death in 683 AD. The crypt is found via a secret staircase below a slab in the temple floor. Within this crypt was found a five-ton slab of carved rock lying on top of Pacal’s sarcophagus. Much has been made of this lid, especially by Erich von Daniken, because of its bizarre imagery – easily taken to be a man in a spaceship. See it here

Near Mexico’s current capital, this city of ruins was thought to have been home to 125,000 people in 600 AD. Teotihuacan was founded in 100 BC, and deserted by 750 AD, which sounds tragic yet few civilizations manage to last 850 years.

Founded by who? Archaeologists have been trying to figure this out and have few clues to work with. The civilization was smart enough to create this massive city, but no trace has yet been found of a writing system – there is the occasional pictograph, but no hieroglyphs or words have been found.

Whoever they were, they were succeeded by the Toltecs, and then by the Aztecs. The Aztecs named the place (“Place of the Gods”) and its major structures.

Another Giza connection: the tops of the Pyramids of the Moon and the Sun are level, because the smaller Pyramid of the Moon is built on an elevated location. The same relationship exists between the two largest pyramids at Giza.

And another. Bottom middle of the red layout below is The Citadel, which many consider to be the base of a pyramid the size of the Pyramid of the Sun, that was never built. Had it been, the three main pyramids would’ve had a similar Orion layout as Giza.

In 1971 it was discovered that the Pyramid of the Sun was built over a natural cave with four chambers, which had been enlarged from a natural lava tube (the region is very volcanic). The cave was obviously a sacred place for it contained remains of offerings and rituals from a period much earlier than the pyramids. Pyramid of the Sun

Model of the Pyramid of the Sun

It is common for ancient sites to have been built in stages, reinforcing the idea that it is the location that is most important. The Pyramid of the Moon went through five distinct phases of building successively larger pyramids on top of previous ones, often partially destroying the previous pyramid in the process. If the unknown civilization had continued for a few hundred years more, perhaps even larger pyramids would have been built on top of the existing ones. Anyone looking for meaning in the angles and lengths of the pyramids should perhaps take into account the prior phases buried beneath the last layer of construction.

An interesting fact highlighted by Graham Hancock in Fingerprints of the Gods is that some of the pyramids contain broad, thick layers of mica, which had to be transported over 2000 miles from Brazil. These sheets are ninety feet square and were not visible, but merely another layer in the construction. Perhaps its purpose was radiation shielding? Sheets and rods of mica bonded with glass can tolerate extreme temperatures, radiation, high voltage, and moisture. One of the modern uses of mica is windows for microwave ovens. It is also used in Geiger counters and cosmic ray detectors. 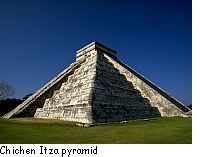 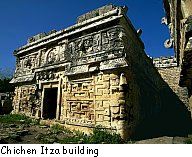 Most of the many other Mayan pyramids are of the same basic shape.

Los Guachimontones in Mexico, the only place you can find circular, stepped pyramids.