WHO ARE PRATIMA AND NARADA

Based in the Byron Bay region of NSW Australia, Narada Dan Vantari & Pratima Mumford are popular speakers on subjects such as astrology, alternative views of ancient history, cutting edge science, and the transformation of global society.

Pratima held spiritual gatherings called Satsang for many years around the world on the request of her spiritual teacher Papaji. Endeavoring to assist  people in awakening to their true potential of Self-Realisation.

She presents each year at the Woodford Folk Festival on predicting the astrological outcomes for the year ahead. At the same time  analysing  future trends and transformational patterns in society. She has a particular interest in what are today called global conspiracies and tomorrow called revealed truths!

Pratima is also the Australian Emissary of the mystic physicist Nassim Harramein whose controversial understanding about physics is on the very cutting edge of science today. She has traveled  with Nassim to  the pyramids of Egypt and down the Nile. to the Bosnian Pyramids & Croatia and to the pyramids of Mexico.

Narada specializes in Sacred Geometry and has written and illustrated a book about the Flower of Life, higher dimensions, and  the relevance of sacred geometry to modern life. You can read the book or order copies at UnderstandingSacredGeometry.com.

Narada is a graphic artist and singer-songwriter, as well as a website creator.

and an album of his original mystical songs at JewelsAndFlames.com.

His 3D printed geometry jewelry and models, and sacred geometry inspired artworks  are at TheSacredGeometryShop.com.

Check out our 3d printed Geometries for sale here at 3dMandalas.com
. Click image for full sizeTHE CONNECTED WORLDVIEW – is our most popular presentation and we will no doubt be offering it again later this year.

Humanity is in the midst of a paradigm shift to a connected worldview that is revolutionising physics and cosmology. This shift will ripple out to affect every aspect of society. We have been taught many half truths about the universe, the history of this beautiful planet, and the nature of consciousness itself.

Using an awesome collection of slides and video clips we will explore the new pyramids and ancient megalithic sites that have been discovered by recent research and new tools such as infrared laser imaging. We will look at the possibilities of how they were really built and the implications that has on history and archeology.

Narada leads us through the history of the current scientific paradigm so we can better understand Nassim’s work and the new discoveries and possibilities that are arising now. He will cover the theories behind Nassim’s Harmonic Flux Resonator device that draws energy from the vacuum, explain the geometrical foundations of Nassim’s physics, and share his appreciation of the beauty of Nassim’s Fracto-Holo-Graphic Universe. Pratima will look at the crystal skulls and elongated skulls that are being found around the  world in astonishing numbers, and look at their implications.

Bringing all these insights together can free us from our cultural conditioning about the nature of reality. Not only that – this knowledge can help bring about a world paradigm shift that unites all of humanity as one in a conscious evolutionary process that brings peace and joy to all beings.
.
Free energy from the vacuum is achievable, even control of gravity is possible, an abundant economy is natural ~ once we free ourselves from the scientific materialistic paradigm…that we live in a random, and essentially meaningless universe.
The connected worldview is a return to the simple geometric wisdom of the Ancients, a return to working with the patterns of Nature ~ with a few new twists. 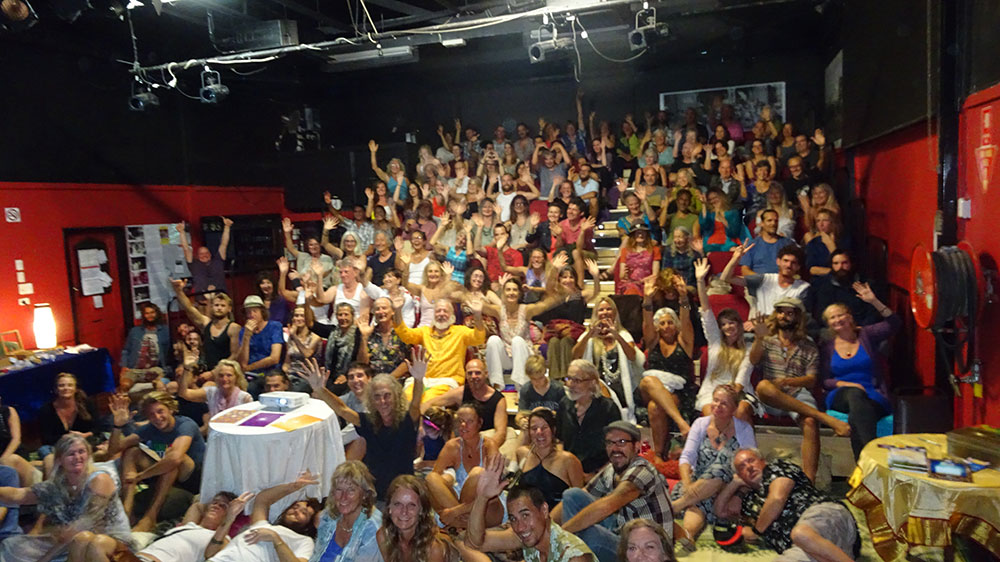 Packed house at the film showing – click to enlarge

We participated in the first ever online Unified Physics course, the Delegate Program offered by Nassim Haramein and The Resonance Foundation, that ran from Oct2014 to Feb2015 and had 1,300 participants including us 🙂  There are 6 modules that cover the importance of our societies World View, how it was formed, Modern Physics, Unified Physics, Ancient Origins, and the Implications & Applications of this Knowledge. They are still running the course, which will get a huge burst of publicity when The Connected Universe movie is released later this year. Catch the trailer for it below. We highly recommend joining in for a life changing experience!

My name is Pratima Mumford. All my life I have been deeply interested in exploring the unity of science and spirituality. In the last decades the outward manifestation of this has been in two forms. Firstly that in 1993 my guru Sri H.W.L. Poonja ( fondly known as Papaji ) unexpectedly asked me to begin holding “Satsangs”  which are spiritual gatherings for ‘Self Enquiry’ in the tradition of Ramana Maharshi.

Click here for a whole page of ‘advaita vedanta’ wisdom.  I did this in my spare time while creating the fashion beading industry in my adopted home of Bali Indonesia. And secondly, that in 2011 I journeyed to Mexico to study with ‘mystic physicist’ Nassim Haramein to be able to teach his new World View and the paradigm shattering physics that he has brought through with it. 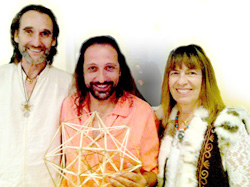 Nassim is a ‘synthesist’ not a reductionist and his presentations usually cover all the subjects included here on this website including physics,society, medicine, & an alternative understanding of history. He sees all things as being inter-related  and in a connected universe.

My hope is that this website will do justice to both these wisdom streams that have flowed through my life bringing such blessings.

The old paradigm of a mechanistic disconnected dead universe is falling apart in the face of the increasingly apparent intelligence and connectivity of everything, (even apparently disconnected modern human beings). The new paradigm is revealing itself in every aspect of human life.

Academic institutions have had to rapidly update their belief systems to cope with the new discoveries in Physics and Cosmology. Political and social systems based on scarcity and competition are struggling to survive while alternatives founded on abundance and co-operation are evolving everywhere. We are realising that an ‘Economics’ that is not founded on the Ecological value of everything to everyone is just a mad system that is bound to destroy itself.

But its not just these systems that are shattering, virtually every aspect of science, our knowledge of the Universe and our place in it, is being radically revised.

The trailer below is for The Connected Universe film that was released in 2016. We called our main presentation The Connected Worldview as it is inspired by the work of Nassim Haramein and the Resonance Foundation in bringing through ‘a new science of everything’. Checkout the Resonance Project site here

Discoveries being made with new satellite geo-scanning technologies are forcing us to question the version of History that says ridiculous things such as “there were only bronze tools beyond 3,300 years ago”. Since we still cannot create an impressive pyramid and dont really know how they did it, more and more people are suspecting that we are not the most advanced human culture to have inhabited this planet!

The discovery in the last few decades of the Gobekli Tepe complex in Southern Turkey, officially dated to around 12,000 years old, has shaken the foundations of archeology. When we heard that there was another, possibly equally old and mysterious site, in Indonesia, we decided to contact the geomeogist who had found it, and the result was our going there with him, and eventually publishing a book about the Gunung Padang pyramid. It includes many of his photo records of his discovery. Recently in 2023 the first episode of Graham Hancock’s hit Netflix series ‘Ancient Appocalypse’ was focussed entirely on this site.

The second half of the following video shows a little glimpse of the Gunung Padang site. You can also order our book about it, which is as far as we know the only printed account of its discovery and mysetery.

Other core dogmas of western science that are crumbling include: that the Universe was Created in the Big Bang 15 billion years ago, that Life is an accidental aberration in an otherwise dead Universe, and that 90% of the weight of the Universe is due to some as yet undiscovered ‘Dark Matter’ or ‘Dark Energy’. The fracto-holographic theory is Nassim Haramein’s name for a new physics based on the geometry of spacetime singularities. All this and more is covered in our multimedia presentations of The Connected Worldview. We are planning events within driving distance of Byron Bay NSW Australia during most of 2016. Please become a member of the New Science of Everything website to receive our newsletter and be able to comment on the posts in our blog.

8min Explanation of the toroidal dynamics by Foster Gamble